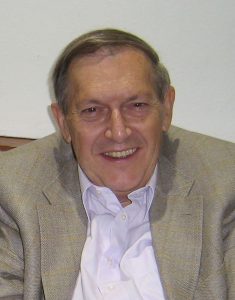 Member of the Scientific Society of Serbia

On March 4, 2020, the big heart of an exceptional man and great scientist stopped beating, leaving us, his friends, students and colleagues, with ever-lasting memories on one admirable life of a great man.

Prof. dr. Milan T. Jovanović, Scientific Advisor in retirement, was born in Kragujevac in 1939. He graduated at the Faculty of Technology and Metallurgy, the University of Belgrade in 1962. That same year he became a researcher at the Department of Materials Science of the Vinča Institute of Nuclear Sciences where he stayed until the end of his days. As a scholarship holder of the International Atomic Energy Agency (IAEA) he spent one year at the Department of Physical Metallurgy, University of Birmingham, UK, where he obtained his M.Sc. degree in 1969. He obtained his Ph.D. degree at the Faculty of Technology and Metallurgy, the University of Belgrade in 1978. Twice, in the year 1985 and year 1986, he was a post-doctoral researcher at the Department of Metallurgy and Materials Science, University of Toronto, Canada. From the year 1993 till the year 1996 he held the Invited Professor position at the Department of Chemical and Materials Engineering, University of Alberta, Edmonton, Canada. The entire scientific activity of Prof. dr. Milan T. Jovanović was focused on the fundamental and applied research in the fields of physical metallurgy and materials science including research in the field of nuclear technology and metallic materials for nuclear reactors, processes of strengthening of non-ferrous alloys (copper, aluminum and precious-based alloys), metallic materials for high-temperature applications (superalloys and intermetallics), metal matrix composites and metallic materials for orthopedic and dental implantology. During his scientific career Prof. dr. Milan T. Jovanović published a total of 208 papers of which 86 were published in leading and highly-respected international journals, 16 in national journals, whereas a total of 106 papers were presented at international and national scientific conferences. He supervised numerous bachelor, master and doctoral theses. He was a member of the Scientific Society of Serbia, long-term Editor-in-Chief of the national scientific journal “Metallurgical & Materials Engineering” and a member of the Center of Excellence „Center for the synthesis, processing and characterization of materials for use in extreme conditions – CEXTREME LAB”.

Prof. dr. Milan T. Jovanović will always be remembered by all who knew him as a great teacher, innovator, and friend always ready to help, listen, and laugh with his fellow workers and companions. His name will forever be closely tied to his loving metallurgy and Vinča Institute of Nuclear Science, his second house.

After more than forty years, he spent as a researcher at the Department of Material Science, Vinča Institute of Nuclear Science, University of Belgrade, the indelible mark of his excellence and knowledge left behind.

Even though he will be forever remembered as an outstanding metallurgical engineer and material scientist respected and recognized from his colleagues all over the world, he was much more than that.

During his career, he introduced numerous young researchers to the fascinating world of science and engineering and for all of them, he will always remain their loving teacher prepared to unselfishly share his knowledge and excitement regarding the discoveries and innovative technological solutions.

All of us who entered his fascinating and exciting world of material science will be forever grateful for the opportunity and privilege to share our ideas and discussions with such an exceptional person.

Prof. dr. Milan T. Jovanović was and always will be loved and respected by all who knew him.